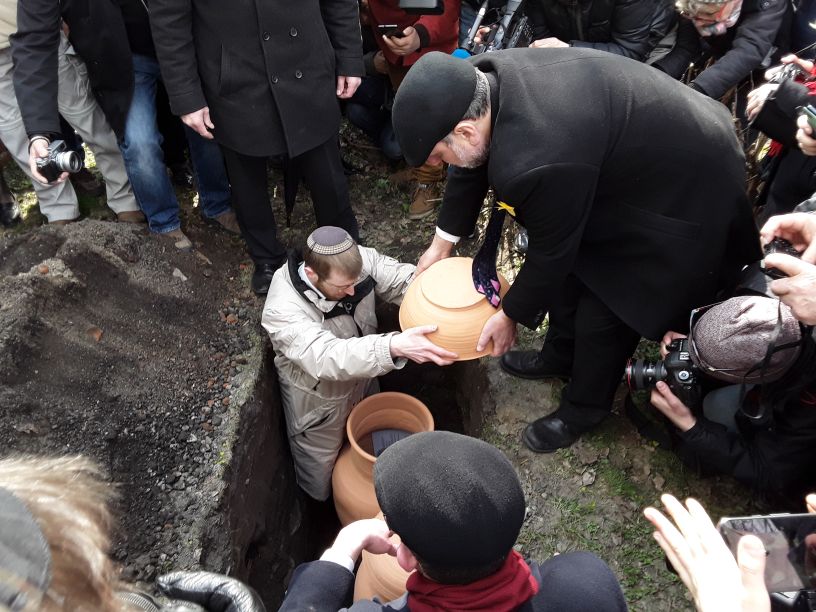 On April 19 a very special and very significant ceremony of burying Torah scrolls took place at the Jewish cemetery on Okopowa Street. The Torah scrolls survived the war, but because of their poor condition were not suited for religious use. We are happy to announce that many members of our community participated in the ceremony, and that it received a very good media attention. Reports from the event appeared in all news reports in the press, radio and television in Polish, English and Hebrew.

The Times of Israel wrote:

WARSAW, Poland — Warsaw’s Jewish community on Wednesday held a burial of damaged Torah scrolls in the Polish capital, an ancient ritual that some believe had not been carried out since the war.

Poland’s chief Rabbi Michael Schudrich said the meaning of the ceremony was “about remembering that for us the Torah scroll is so important, is so holy, that when it’s no longer usable we bury it as if it was a human being.”

The community buried fragments of the pre-war scrolls inside two enormous clay jars at the city’s Jewish cemetery on the occasion of the 74th anniversary of the start of the Warsaw ghetto uprising.

Around 7,000 Jews died in the month-long uprising — Europe’s first urban anti-Nazi revolt — most of them burned alive, and more than 50,000 were deported to the Treblinka death camp.

The Germans then razed the ghetto, after which the notoriously brutal German commander Juergen Stroop penned a report entitled “The Jewish Quarter of Warsaw is No More!”

Schudrich said Wednesday’s ceremony proved Stroop wrong “because while we’re burying this, a living Jewish community is burying it.”

“The words of the Torah are studied every day all over the world, also here in Warsaw, where there’s a living Jewish community. The ultimate response to the German oppression,” he told AFP.

Poland was home to Europe’s largest Jewish community before World War II, numbering 3.3 million. The Nazis killed most of them during the Holocaust.

One year after Nazi Germany invaded Poland in September 1939, they built a special district in Warsaw for Jews, isolating around 480,000 behind ghetto walls.

On April 19, 1943, the Nazis began liquidating the ghetto, where just 60,000 people remained after the vast majority died of hunger or disease or had been sent to the Treblinka death camp.

It was on that day that hundreds of poorly armed Jews launched the uprising, preferring to die with a weapon in hand than at a death camp.