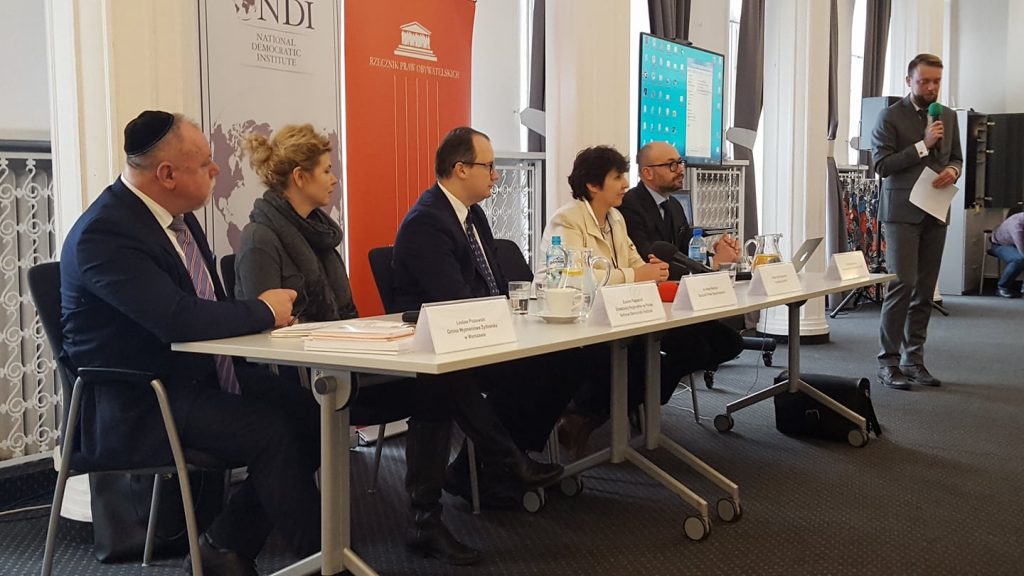 On the 17th of January, a Conference co-organized by the Warsaw Jewish Community took place at the Ombudsman Office in Warsaw, Poland.
The Conference was a summary of the project organized by the coalition of organizations representing ethnic and national minorities. The members of the coalition are Jewish Association CZULENT (representing the Jewish minority), Zustricz Foundation (representing the Ukrainian community), Warsaw Jewish Community (representing the Jewish minority) and Allerhand Institute (a majority organization) in cooperation with Dialog – Pheniben Foundation (representing the Roma minority).
The innovativeness and need for such project was confirmed by the high attendance and the invitation of the coalition members to present the projects outcome at the Conference of International non-governmental organizations, INGOs, held yearly by the Council of Europe.
The idea of the project was to research the quality of cooperation between minorities and majority organizations working for minorities and local and state authorities as well as research the most urgent needs of minorities. The results of the survey will be presented in The Book of Good Practices of Actions / Projects / Grants / Programs for National and Ethnic Minorities and Foreign Residents, which will promote cooperation and coalition building as well as stress good practices applied by local and state administration. It will also present to the authorities needs of minorities and foreign residents living in Poland.
Focusing on a positive message the project can mobilize public institutions to be more active and open having a useful tool of projects and procedures present in different institutions and in different Voivodships. A dialogue will bring creation of partnership and mutual understanding, changing the way administrative bodies view minorities. Minorities will be encouraged to work with institutions and majority organizations, further developing more open, tolerant and diverse society.
The Project received the patronage of: Ombudsman Office, Union of the Jewish Communities in Poland, Kashubian-Pomeranian Association, Union of Ukrainians in Poland, The Polish Karaite Association, Association of German Socio-Cultural Societies in Poland, Society of Slovaks in Poland.
The conference attracted many participants, showing that both public administration and NGO’s are willing to cooperate and have a meaningful dialogue, which is especially important in the current situation of the Polish society and public discourse. Another very beneficial outcome was a meeting of the representatives of different ethnic and national minorities and foreign residents expressing a need to cooperate in order to protect themselves and support in this difficult time.