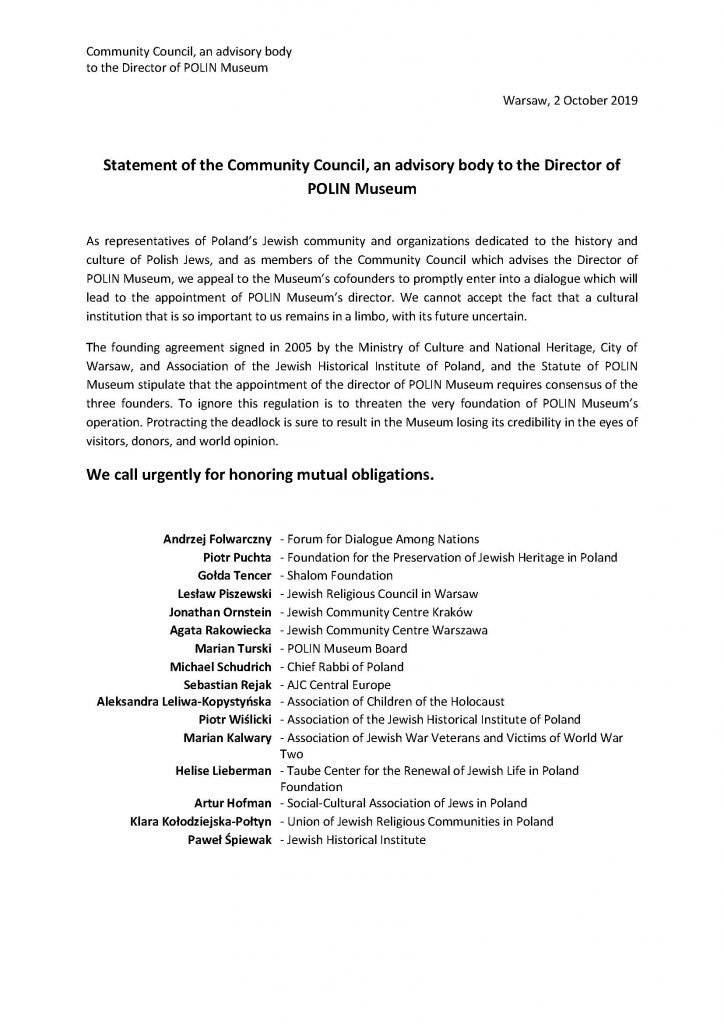 Community Council, an advisory body to the Director of POLIN Museum

Statement of the Community Council, an advisory body to the Director of POLIN Museum

As representatives of Poland’s Jewish community and organizations dedicated to the history and culture of Polish Jews, and as members of the Community Council which advises the Director of POLIN Museum, we appeal to the Museum’s cofounders to promptly enter into a dialogue which will lead to the appointment of POLIN Museum’s director. We cannot accept the fact that a cultural institution that is so important to us remains in a limbo, with its future uncertain.

The founding agreement signed in 2005 by the Ministry of Culture and National Heritage, City of Warsaw, and Association of the Jewish Historical Institute of Poland, and the Statute of POLIN Museum stipulate that the appointment of the director of POLIN Museum requires consensus of the three founders. To ignore this regulation is to threaten the very foundation of POLIN Museum’s operation. Protracting the deadlock is sure to result in the Museum losing its credibility in the eyes of visitors, donors, and world opinion.

Piotr Puchta – Foundation for the Preservation of Jewish Heritage in Poland

Aleksandra Leliwa-Kopystyńska – Association of Children of the Holocaust

Piotr Wiślicki – Association of the Jewish Historical Institute of Poland