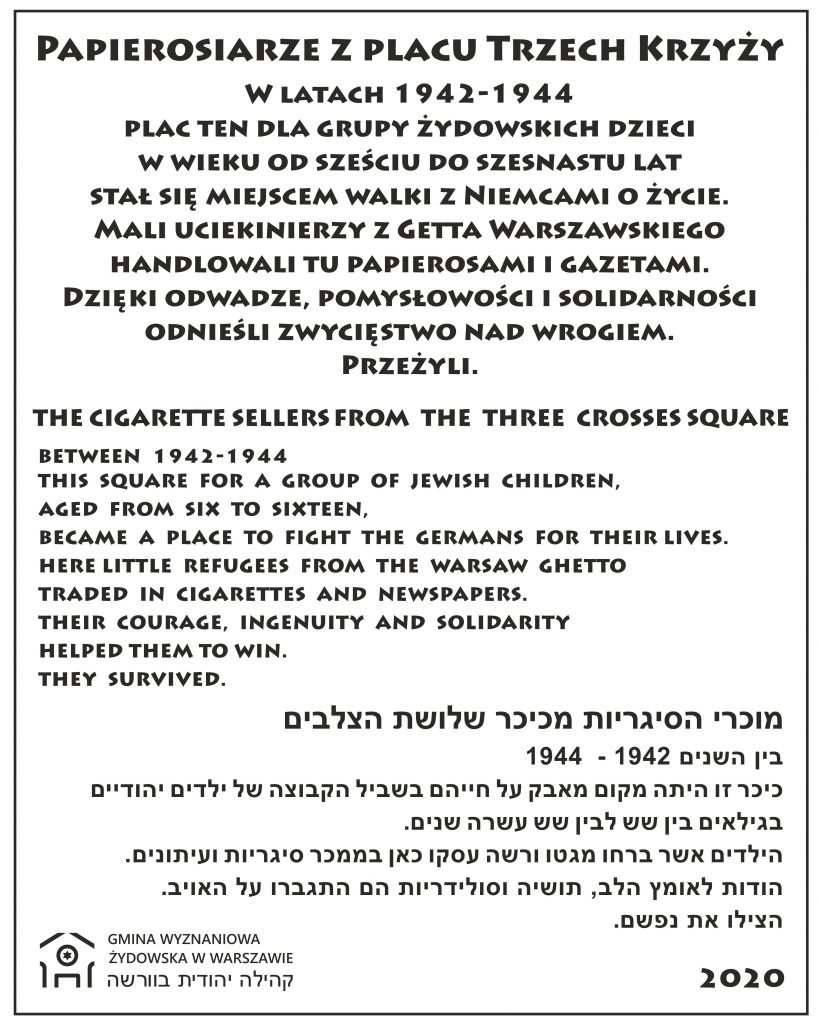 The little Jewish heroes of World War II who defeated the enemy – they survived.

The history of Cigarette Sellers of Three Crosses Square is a little-known story of the occupied Warsaw: that of a small group of about 20 Jewish children aged six to sixteen – orphans and refugees from the Warsaw ghetto, who managed to escape from the Warsaw ghetto and were lucky to get alive to the Aryan side.

They made a miserable living there selling cigarettes and newspapers to the Germans, often to soldiers, SS and Gestapo officers. The children worked during the day at Three Crosses Square, located in the very center of the German district. Their courage and determination gave them a little money and an alibi – the German occupiers did not know that the Cigarette Sellers were Jews. The children lived and slept rough: in bushes, ruins, empty cellars and staircases, in a nearby hospital – hungry, cold and very brave. Sometimes they were helped by Polish women, who gave them food and shelter.

In October 1943, Józef Ziemian (real name Zysman), at that time 21 and also a fugitive from the ghetto, contacted the Cigarette Sellers, and took care of them on behalf of the Jewish National Committee. Ziemian provided the children with false identity cards confirming their Polish nationality, gave them money and clothes. The committee also made attempts to place the children in Polish homes, should their presence in and around Three Crosses Square be too dangerous. After the outbreak of the Warsaw Uprising in 1944, the children remained in Warsaw and many of them took part in the fighting. Girls were nurses and messengers, boys fought in various units, and their heroism was described in insurgent newspapers. Following the fall of the Warsaw Uprising, the children were sent to German internment camps, and after the war, most of them left for Israel.

In 2017 the memoirs of one of the Cigarette Sellers Mr. Peretz Hochman entitled To Have the Courage to Live were published by the Warsaw Council. Peretz Hochman for his heroism during the Warsaw Uprising was awarded by the President of the Republic of Poland Mr. Lech Kaczyński with the Knight’s Cross of the Order of Merit of the Republic of Poland.

The story of Cigarette Sellers is the only example of such a large group of Jewish children who survived after escaping from the ghetto – thanks to their courage, creativity and solidarity.

A group of members of the Jewish Religious Community in Warsaw firmly believe that the fate of Cigarette Sellers needs to be remembered by people living in Warsaw and visiting Warsaw, and for this reason they initiated the project of placing a commemorative plaque on a wall of a historic building housing the Institute for Deaf Children founded by Jakub Falkowski in the XIX century. The project has the approval of the Warsaw authorities. The plaque, in harmony with the architecture of Three Crosses Square, was designed by the professor of the Academy of Fine Arts, Mr. Antoni Grabowski (www.antonigrabowski.com). The text is in three languages: Polish, English and Hebrew. Polish text will be convex, the other two texts will be concave. Next to it a QR code will be displayed, linking to a website where the fate of the children will be explained and the Poles who helped them will be commemorated.

The cost includes: carving and casting of the brass plaque made of siliziumtombak using the traditional lost-wax process, dimensions 60 cm x 76 cm, together with the installation and the launch of a multilingual website.

We are inviting you to help to commemorate the heroic Cigarette Sellers and support the project financialy.

Donations from outside Poland can be also made directly to the following accounts (SWIFT/BIC: PKOPPLPW):